Massive wildfires near the Ontario-Minnesota border, as well as blazes farther west in Canada and the United States, are bringing smoke throughout Virginia, causing state officials to issue a health alert Wednesday morning due to high levels of particulate matter.

“It’s basically all over the state at this point,” said Virginia Department of Environmental Quality meteorologist Dan Salkovitz. “All the monitors that we’ve got in the state are elevated today.”

State air quality monitors registered the highest levels of fine particulate matter in Winchester and the lowest in Hampton, although all of the reports were higher than normal. 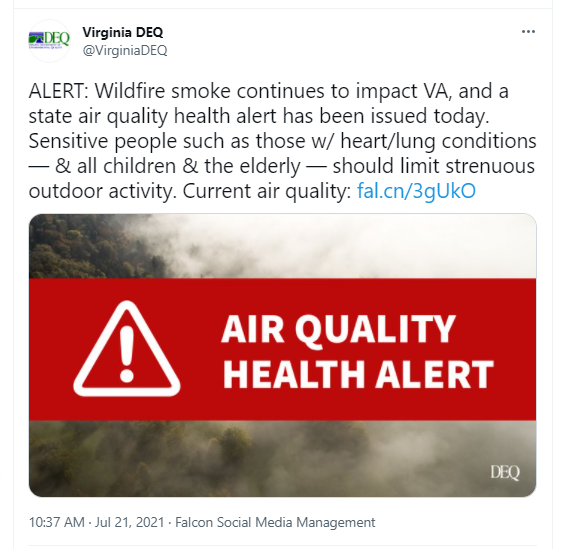 Particulate matter is a mixture of solid and liquid droplets in the air that can be inhaled. According to the U.S. Environmental Protection Agency, exposure to these particles can aggravate respiratory systems and heart function and can exacerbate existing conditions such as asthma.

Much of the smoke seen in Virginia is coming from a plume generated by hundreds of fires in Ontario, said Salkovitz, although blazes along the West Coast are also contributing. While earlier this week the effects were mostly seen in hazy skies and brilliant sunsets, smoke began mixing with air closer to the earth’s surface today, driving down air quality.

A cold front behind the plume is expected to bring clearer air, Salkovitz said, but “unfortunately that front is taking its sweet time to get here.”

Smoke from the western and Canadian wildfires has caused problems throughout the East Coast this week, triggering officials in numerous states to issue health alerts.

While wildfires are driven by a variety of factors, scientists have linked their increasing incidence and intensity in the West with climate change, which has been driving up temperatures and changing precipitation patterns.

Virginia residents can sign up to receive air quality alerts from DEQ here.

This real-time technology and data makes Richmond’s the first “Smart Sewers” in Virginia. Full credit to Whit Clements for giving me that headline of this announcement from RVAH2O.

Real-time data is now viewable in an interactive map that looks just like the one above so you can know exactly where and when overflows occur (and plan your James River visits accordingly!).

(The map is linked in perpetuity in our bio as “Check for Combined Sewer System Overflow Events Here” but you can also bookmark the link for rainy days!)

Here’s how it works: just hover over (or, on your phone, click on) any of the remaining 25 overflow points in Richmond to see the last time combined flows were discharged—and just like that you’ll be up-to-date!

Red triangles give you a quick notification that there’s been an overflow event in the past 48 hours. 🔺

When you see yellow boxes, that means our team is recalibrating those sensors and meters. 🟨

This up-to-date system will replace the email alerts of the past (which were triggered and automated when it rained 0.1″ at the @richmondairport, which doesn’t always reflect rainfall within city limits).

This real-time technology and data makes Richmond’s the first “Smart Sewers” in Virginia (we love being trendsetters)! 🧠🌊

And this system will help us to maximize and fully utilize the capacity within our system to prevent overflows and reduce overflow volume!

We know y’all love accurate information and continuous updates, so we hope you’ll love this upgrade and map made for you too!